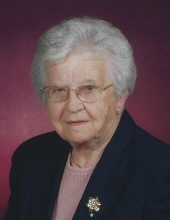 She was born September 17, 1921, in Argyle, Missouri, the daughter of the late Dietrich Richard and Mary Catherine (Reinkemeyer) Groene.

Alma worked for many years at Hilkemeyer Grocery Store in Westphalia and in 1993 she started to work with her son-in-law and daughter at Samuels Tuxedo and continued to work there for 20 years.

She was a member of St. Joseph Catholic Church in Westphalia, St. Ann’s Sodality, Westphalia Senior Citizens, and the Knights of Columbus Auxiliary. Alma had a strong work ethic and was know for her delicious pies, cookies, and cinnamon rolls.

Mass of Christian Burial will be 10 a.m. Monday, May 13, 2019, at St. Joseph Catholic Church in Westphalia with the Rev. Anthony J. Viviano officiating.

Burial will be in St. Joseph Catholic Cemetery.

In lieu of flowers, memorials are suggested to St. Joseph Church Renovations or to Masses.

Those wishing to email tributes or condolences to the family may do so at the www.dulletrimble.com website.
To send flowers to the family in memory of Alma Josephine Verhoff, please visit our flower store.