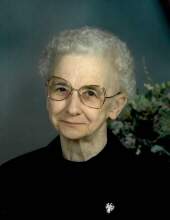 She was born October 20, 1927, in Taos, Missouri, the daughter of the late Leo Henry and Anna Mary (Rustemeyer) Eiken.

Agatha attended school in Taos. She was united in marriage on November 27, 1947, at St. Francis Xavier Catholic Church in Taos to Anthony William “Tony” Peitzmeyer who preceded her in death on June 27, 2003. They celebrated fifty-six years together.

In earlier years, Agatha worked for Tweedie Shoe Factory where she met her husband, Tony, before becoming a homemaker and caring for her family.

She was a member of St. Francis Xavier Catholic Church in Taos and enjoyed quilting, sewing, and flower gardening.

She was preceded in death by her parents; a son-in-law, Larry Nilges; a brother, Cornelius Eiken; a sister, Alberta (Roman) Hagenhoff; a brother-in-law, Carl Potts; a sister-in-law, Teresa Eiken. On her husband’s side, sisters-in-law and brothers-in-law, Clara (Lawrence) Stegeman; Marie Peitzmeyer; Hilda Koetting; Theckla (George) Mertensmeyer; and Leonard Wieberg; and several nieces and nephews.

Visitation will be 4:30-7 p.m. Tuesday, August 4, 2020, at Dulle-Trimble Funeral Home in Jefferson City with a prayer service at 4 p.m. An additional visitation will be 10-11 a.m. Wednesday at St. Francis Xavier Catholic Church.

Mass of Christian Burial will be 11 a.m. Wednesday, August 5, 2020, at St. Francis Xavier Catholic Church in Taos with the Rev. Michael Penn officiating. The service will be live streamed for those who wish to watch from home. The link can be found on Agatha’s obituary page at www.dulletrimble.com.

In lieu of flowers, memorials are suggested to Masses, or to St. Francis Xavier Catholic Church.

Those wishing to send condolences to the family may do so at the www.dulletrimble.com website.
To send flowers to the family in memory of Agatha Elizabeth Peitzmeyer, please visit our flower store.